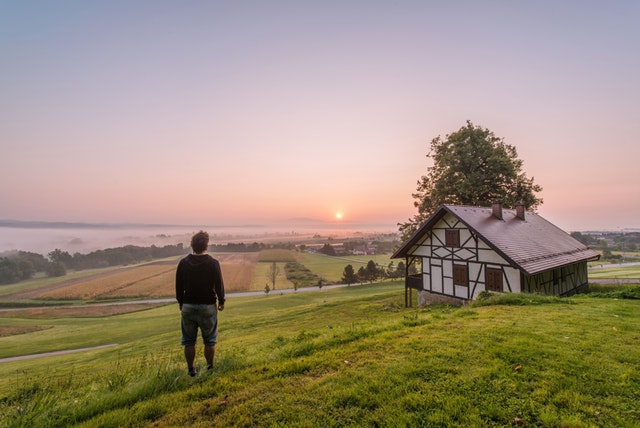 Building the House: A Picture of Identity

I have this metaphor for identity that I like to use. I like to think of identity as a house. In a house you can have a lot of rooms: bathroom, kitchen, bedrooms, den, office, laundry room, craft room, sunroom, and so on. You can also change those rooms around either just by changing the furnishings and wall colors and hangings, or by remodeling altogether. Just about everything inside of a house can change, and you can even remodel the outside of the house; but what doesn’t (easily) change about a house is the foundation. The foundation of the house is incredibly important because it keeps the house secure; without a solid foundation the whole house can fall apart. Likewise, the foundation is the footprint of the house, the general shape that the house will be. The house will not be larger than the foundation allows.

Just like a house, a person’s identity can have many “rooms.” A person’s identity might include athlete or cook or musician and so on. And much like a house, these “rooms” can change with very little impact to the rest of the “house.” Say you are an athlete and you break your back and can no longer participate in any sports, you might remodel the gym in your house into a woodshop or something else entirely. This likely would be a difficult change, but would not change the entire house.

Identity is also like a house in that it needs a good foundation. A person’s identity needs to be founded on something solid, unchanging. A problem I often see in counseling is people who have based their identity on things that change and are out of their control. When some aspect of that foundation is destroyed, they are left feeling lost, alone, and depressed; their whole house crumbles. An example I like to use is that of a basketball player. Say a basketball player bases his identity in his ability to play basketball; that is his foundation. Then that player breaks his knee in practice one day and the doctors tell him that he will never be able to play basketball again. What happens to his identity? The whole house comes crumbling down because the foundation was destroyed.

So what makes a good foundation? A good foundation is built out of things that are unchanging, essential attributes of the individual which are unlikely to change. If you strip away all of the non-essentials, what aspects of the self remain? Those should make up the foundation.

I would like to take this metaphor a little further now and apply it to masculinity.

I think part of what is awry in western male culture (I’m speaking in generalities here) is that we’ve lost sight of what the foundation of masculine identity is. We have defined masculinity a certain way (strong, stoic, athletic, etc.) and made that into the foundation for our masculine identity. This foundation is much too confining. What has happened as a result is those who are able to build on that foundation do so and we end up with a bunch of cookie cutter houses, men who look and act the same. The men who are not able to build on that foundation for one reason or another (they can’t fit the mold, or refuse to) end up feeling lost, alone, and depressed because they don’t know what it means to be a man.

I would like to attempt, over the next several blog posts, to develop what I think could be a much truer, broader, and more solid foundation for manhood. I will do this by attempting to boil down masculinity to its core. I want to discover what it is that is essentially true about men, and thereby give us all a much more variegated foundation as well – one that allows for more individual expression of masculinity. I want to free men from the confines of how western culture has defined masculinity, and give a foundation to those who are feeling lost for them to build upon.

I want to clearly define a couple of things about this series:

First, it should be noted that in attempting to define the core of masculinity, I am not in any way attempting to also define femininity. I think there is a dangerous tendency to think that anything that is not masculine must therefore be feminine and vice-versa. This is rubbish. I don’t think that masculinity and femininity are this dualistic. I think it may even be likely that some of the core attributes of both men and women are the same. So, as I attempt to define the core of what makes a man, resist the temptation to think that I am defining women as the opposite.

Second, I do not presume to think that I am in any way an authority on masculinity; neither should you think that I am. I think I have some insight into the heart of men, but it is not my intent that my words here should be set in stone. My desire is to open a discussion into what it really means to be a man. If you agree with me, please comment and tell me why. If you disagree, let’s talk about that. If you think I should add something that is missing, tell me about it.